[A recent Tribune Review article featured creations at the 2016 AIU STEAM Showcase in Pittsburgh. Included was a canine robot named Marvin. The Carlynton student who created Marvin gained her initial training through Birdbrain Technologies Robot Petting Zoo Makeathon during the summer of 2015. Stephanie’s original creation was Fred, a sparkling red dinosaur. It’s wonderful to see how Marvin took on a more advanced look and feel using the Hummingbird Kit from Birdbrain. Tom Lauwers, the founder and Chief Scientist for Birdbrain Technologies,  will share some of the wonderful projects, like Fred (see below), created at Makeathons across the country at the Three Rivers Educational Technology Conference on November 8, 2016]

Stephanie Bonifield stroked her dog Marvin under the chin, and he wagged his tail.

The orange pooch, made of duct tape and cardboard, also blinked his light bulb eyes and shook paws with people who stopped to greet him.

“He’s got a gimpy leg, but it works,” said Bonifield, 17, a senior at Carlynton Junior-Senior High School. Marvin is her second robot — she also made Fred, a dinosaur.

She and other Carlynton students showed off their work at the Allegheny Intermediate Unit’s annual STEAM Showcase this week. Twenty-eight school districts from Western Pennsylvania sent students to the event to show off what they did with their $20,000 STEAM grants from the AIU in the past year.

The showcase is just one such event that celebrates science, technology and engineering education in the Pittsburgh area. Remake Learning Education Friday, scheduled Oct. 14 for students and educators, is already sold out. Organizers said they expect more than 1,500 students and educators at the Buhl Community Park and Nova Place for a sneak peek —including live demonstrations and hands-on workshops and activities—of the annual Pittsburgh Maker Faire, scheduled Oct. 15 and 16.

“There seems to be a voracious appetite for kids and educators today for these authentic making and DIY experiences/STEM experiences,” said Bill Schlageter, director of marketing for the Children’s Museum of Pittsburgh, which is helping to organize the first-time event for students. “We’re very excited about it.” 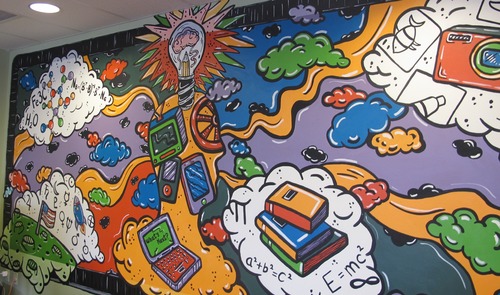 A local education group has opened a new education technology lab called “transformED,” where educators can browse robotics, apps and devices for free.

A Digital Playground for Adults and Kids