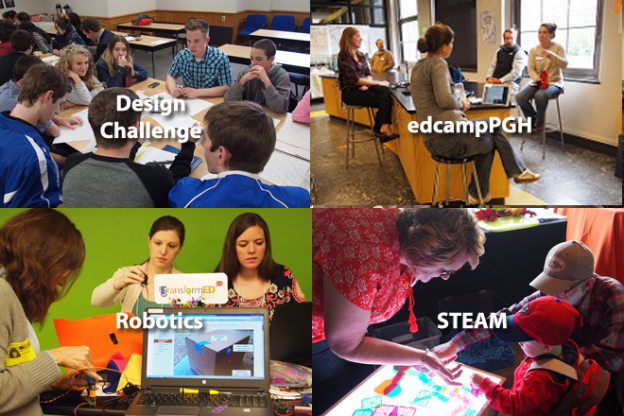 Photos by Norton Gusky CC BY 4.0

In April I finished coordinating a second design challenge with four schools from the Parkway West Career and Technology Center (PWCTC) consortium.   Each Design Challenge tapped into a real world problem at the Energy Innovation Center (EIC) in Pittsburgh. The first challenge focused on a redesign for the courtyard and entrance to the EIC. The second challenge tackled water run-off problems at the Letsche School located next to the EIC.

In April I presented at the Consortium for Schools Networked (CoSN) Conference in Washington D.C. I shared an overview of the new CoSN Edtech Next Report on “Students as Digital Creators.” May featured over 300 events as part of Remake Learning Days. I joined a series of events including a Design Workshop at Montour High School, the PAEYC Unconference: Maker Tots, and the spring edcampPGH.

I work with two startups  – Zulama and Birdbrain Technologies.  Tom Lauwers, the founder and Chief Scientist for Birdbrain, developed a Robot Petting Zoo to challenge older students to design robotic animals to engage younger children. The Makeathon activity uses recycled materials and the Hummingbird Robotics Kit. For the workshop at the Children’s Museum in Pittsburgh, there were educators from ASSET, the Carnegie Science Center, West Liberty University, and the YMCA of Pittsburgh. In May the Montour School District offered in its new transformED West space a Makeathon workshop for educators that came from schools like Allegheny Valley, Fox Chapel, Montour, North Allegheny, and Sewickley Academy.

I’m now working with a team of educators from the South Fayette School District to launch in June the STEAM Innovation Summer Institute. Last summer over 100 educators from around the region joined the 16 workshops that ranged from STEAM investigations to Game-based Learning. This summer’s line-up will include over 20 sessions including a series of new sessions on Virtual and Augmented Reality, Programming Clones, and Tapping into Big Data.