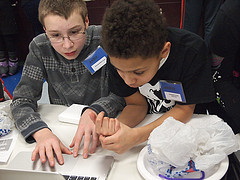 For a number of years the Grable Foundation and the Claude Worthington Benedum Foundation have promoted the integration of the Arts with Science, Technology, Engineering, and Math (STEM) in the Pittsburgh Region. They have provided funds through their own institution as well as the Sprout Fund and the Allegheny Intermediate Unit. I’ve been quite fortunate to work on a number of projects that have focused on STEAM related strategies and solutions. This includes the Hummingbird – a robotics kit originally developed at the CREATE Lab at Carnegie Mellon University (CMU)  by Tom Lauwer and now commercially available through Birdbrain Technologies, Zulama – another CMU project that two of the instructors in the Entertainment Technology program created and then Nikki Navta brought to the K-12 market, and the STEAM Innovation project at the South Fayette School District.

The Hummingbird is designed to enable engineering and robotics activities for ages 10 and up that involve the making of robots, kinetic sculptures, and animatronics built out of a combination of kit parts and crafting materials. The “Arts”‘ becomes part of a design process as well as the development of stories, plays, and other creative arts.

My role is to help develop a training framework leading to the certification of trainers to work with schools and informal learning providers like libraries or after-school programs.

There have been some great examples I’ve seen at the Allegheny Valley Middle School and the Ellis School in Pittsburgh where students have created a variety of products using the Hummingbird kits. At the Springdale Middle School students created multimedia dioramas as part of a study of poetry.

Zulama’s Entertainment Technology Academy incorporates a variety of systems, including STEAM. Students modify and create games as part of their introduction to game-based learning in the introductory “Evolution of Games” course. In other Zulama courses students are creative producers and designers developing apps, story-boards, or 3-dimensional graphics.

For Zulama I’m also working on building a professional development system that includes in-person and online training. I serve as a researcher – finding stories and research examples to show the power of game-based learning. I also act an editor responding to the development of training materials.

Originally Zulama started in Western Pennsylvania, but in 2014 the program spread to Ohio, Alabama, and Florida. The best examples for the use of the Zulama materials are in the Elizabeth Forward and West Allegheny School Districts.

Into the Curriculum and After School: South Fayette, MACS, and Hilltop

The South Fayette School District has become a national leader in STEAM-based learning. The STEAM Innovation model is a K-12 integrated curriculum that taps into problem-based learning and computational thinking around environmental and other subject areas. Students learn to code using the programming language Scratch  starting in first grade. At all levels the “Arts” play a key role. Students create stories, musical compositions, or graphics as part of their culminating projects.

I serve as the “outreach” coordinator working with the Fort Cherry School District and the Manchester Academic Charter School. The Grable Foundation, a Pittsburgh based organization, challenged the school district to reach out to other schools to share the STEAM Innovation model. During the 2013-2014 school year along with Aileen Owens, the Director of Technology and Innovation at South Fayette, and Melissa Unger, the STEAM Facilitator, I worked on the scaling of the project to other sites. Based on our preliminary data the project has been very successful meeting the needs of diverse learners not only at South Fayette, but in other districts.

While Scratch made its way into the curriculum at South Fayette and MACS, it was the tool of choice for after-school programs at the Hilltop YMCA program and schools like Fort Cherry.

In addition to the school year activities, Aileen Owens and I developed a Summer Institute to train teachers to use the strategies and processes in the STEAM Innovation model. In July 2014 over 70 people from over 20 schools, districts, and higher education institutions joined the summer activities.

Here’s a photo story from Storehouse highlighting the South Fayette and MACS project.