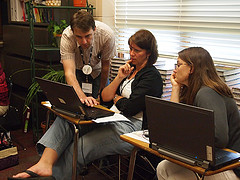 In July 2012 I had the honor to meet Aaron Sams, one of the founders of the Flipped Learning Network. My colleague, Sean McDonough, asked me if I knew that Aaron was moving to Pittsburgh. I knew Aaron’s work as one of the key proponents of the Flipped Classroom, but I had no idea he was relocating from Colorado to Pittsburgh. When we met we immediately realized that we were both driven by our desire to empower students and teachers and provide new ways to personalize learning. I asked Aaron if he would be interested in any projects in the Pittsburgh area. Aaron responded enthusiastically. During the 2012-2013 school year Aaron joined me as part of the development team for Classroom Salon at Carnegie Mellon, worked with the Mars and South Fayette School Districts on Flipped Learning, presented at TRETC, and collaborated with me on a presentation at FlipCon13.

In 2010 I tested the waters with Classroom Salon in my Carnegie Mellon University course, Planning for Innovation. I wanted a way to enhance the conversation between my students and guest presenters in my course. Classroom Salon originally was developed as a tool to extend the conversation in David Kaufer’s English courses. David realized that the quality and level of participation of his students could be increased by “Flipping Learning.” If the students read the literature assignments ahead of time and annotated the digital text with comments and questions, David would know ahead of time where to focus his attention in class.

I discovered that the quality of in-house discussions increased dramatically. My guest presenters knew ahead of time the key issues to discuss in person or via Skype. However, all of our conversations were based on text. One of my students asked, “Isn’t there something like Classroom Salon for video?” I did a search and found a tool. I went to Ananda Gunawardena, the co-developer of Classroom Salon, and demonstrated the tool. Ananda immediately perceived the possibility for creating contextual conversations around video with the same set of analytical tools that were found in the original text-based version.

When I introduced Aaron Sams to Ananda in the fall of 2012, Ananda immediately realized that Classroom Salon could be a powerful tool to flip learning. Aaron Sams described how teachers were searching for a tool to let them know that a student had completed an assignment and more importantly teachers were clamoring for a tool to allow students to ask questions or make comments that were directly linked to a time-stamp in the video.

In the fall I met David Taylor at the South Fayette Middle School. David had created a Flipped Learning environment whereby his students searched for appropriate videos to solve algebraic problems. David felt the students were engaged at a level he had never seen before. However, when I asked him about the conversation about the solutions, he explained that this element was not as strong. So, I asked him to consider using Classroom Salon and put him in touch with Aaron Sams. Over the course of the rest of the school year David discovered great success with his two classes. The students used Classroom Salon as the key tool in their Flipped Learning. They posted comments in response to guided questions that David composed.

David’s students responded to a pre-Salon and post-Salon survey. The survey indicated that students found algebra more “useful” after the Classroom Salon activities. What did that mean? I talked with the students and they indicated that they now understood why they needed to use algebraic algorithms. 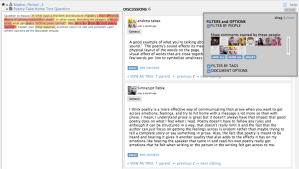 Based on my work with the South Fayette School District, the Ellis School, and the Fox Chapel Area School District, I submitted a proposal to share my findings. I asked Aaron Sams if he would join me. Aaron responded positively to the opportunity, but did not want to make a final commitment until the time of the conference. In June 2013 Aaron joined me unbeknownst to most FlipCon13 participants for a presentation where he would explain why he found Classroom Salon a tool to meet the needs of educators looking for an analytical method to better understand student learning in a flipped environment. I added details from the case studies I had observed. I highlighted the contextual awareness that Classroom Salon generates in addition to the analytical data that educators could easily use for their teaching.

Rick Malmstrom, a teacher of AP Government at the Ellis School, shared in an interview his findings. He discovered that Classroom Salon provided a tool to increase the collaboration and communication of his students using primary documents to understand the trends in American politics. 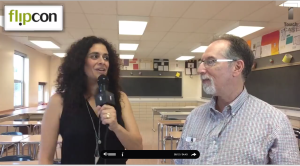 For the first time the Flipped Learning conference will cross the Mississippi. From June 23-25 the Mars Area School District will host the conference. I’ll serve as a local coordinator for the event. I’ll bring my connections with regional groups like the Sprout Fund and the Carnegie Science Center to make the 2014 event a showcase for Connected Learning and the Pittsburgh region. This year I had a chance to help with the design and implementation of the Flipped Learning Conference (FLIPCON14). At the conference I served many roles, including chauffeur, moderator, photographer, and presenter. At the conference I met with one of the sponsors, Touchcast. Here’s an interview with me: