[Mitch Resnick in this NPR article highlights the importance of letting kids “play” with code. If we just have kids solve pre-determined problems, it’s like teaching writing by only learning grammar. I’ve been fortunate to see kids tap into the power of Scratch in my work with the in school programs at South Fayette School District and the Manchester Academic Charter School, as after-school programs sponsored by the YMCA. It works everywhere.] 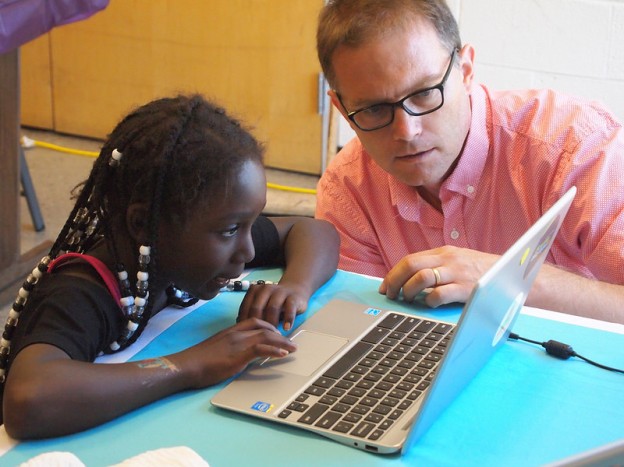 For Computer Science Education Week (Dec. 7-13), the nonprofit Code.org has helped organize nearly 200,000 “Hour of Code” events around the world. It’s advocating for computer coding as a basic literacy and an essential ingredient for jobs of the future, and there’s a lot of momentum behind the idea.

The biggest school systems in the country, New York City and Los Angeles Unified, each announced this fall that computer science will be a required course for all grades within 10 years. Coding is also part of national curricula in the U.K. and soon will be in Australia.

Mitchel Resnick has been at the forefront of computer science and early education for decades. He heads up something called the Lifelong Kindergarten Group, which develops new technologies for creativity at MIT’s Media Lab.

In the early 2000s, his team developed Scratch, a “visual” programming language. Visual means it depicts commands as blocks that can be snapped together, like Legos, into more complex sets of instructions. A version called ScratchJr, intended for those as young as 5, has been downloaded over 1.5 million times from the Apple App Store.