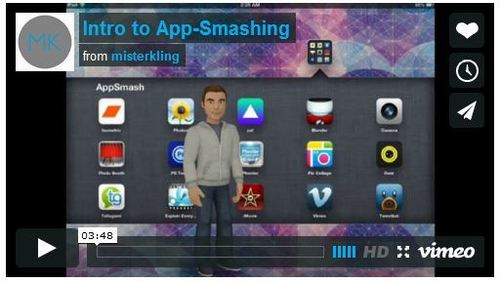 ““I am not a teacher, but an awakener.” Robert Frost

‘App Smashing’ (I have also heard it called App Synergy) was invented by Gregory Kulowiec.  App Smashing is when students create content using a variety of apps for example smashing Tellagami and iMovie to make a video. Intro to App-Smashing from misterkling on Vimeo does a great job of explaining what App Smashing is more in-depth.”

Here’s a great tutorial that explains step-by-step how to App Smash – use multiple apps to generate a digital product.